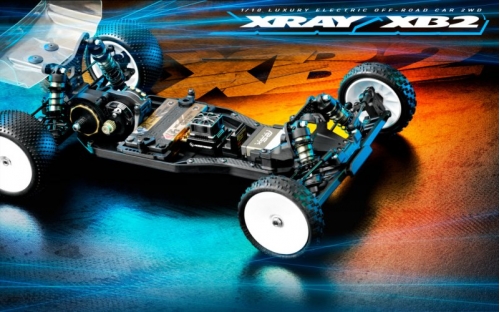 The XB2 is typically XRAY–premium, professional, high competition R/C car for the most demanding racers, developed with attention to the smallest details and backed by premium service & support…a luxury masterpiece.

Designed, developed, and fully manufactured in-house at the XRAY factory in Slovakia, Europe, using the most high-tech German and Swiss machines and premium European materials, crafted with XRAY's legendary attention to detail by our artistic production specialists. The XB2 is truly a masterpiece.

The XB2C was extensively tested at the carpet track at Hudy Arena and during the whole EOS race series season at various tracks around the Europe. The Carpet edition was at the same time tested at various Astro tracks.

Successful development of the XB2 – like all other XRAY platforms – would not have been possible without the involvement of the entire racing team working the entire year to test new ideas, prototypes, and improvements. The racing team travels to all major races around the world to provide XRAY drivers with first-class support & service so they can be assured that they always get 1st class treatment as part of the XRAY team.
MANUFACTURER

At the same price!